The Rose Platinum Anniversary card cross stitch kit has a single mauve-pink rose with fern in a stem vase.
The impression of water in glass is created with pearly filament thread.

This Rose Platinum Anniversary card was created for the 2017 Platinum Wedding Anniversary of Queen Elizabeth II and Prince Phillip.
The Anniversary card is for the lucky few who live to celebrate 70 years of marriage !
A single mauve pink rose rests in a stem vase with a feathery fern. The water in the vase looks reflective because of the pearly filament thread.
Grey metallic thread adds glitter to the ’70’. The card has a hand-written ‘Happy Anniversary’ greeting.

This Platinum Anniversary card kit has only top quality materials ~ Zweigart fabric, Anchor, DMC and metallic thread, needle, card and envelope.
The pack has full instructions with cross stitch basics and tips for fine stitching and mounting the card.
The clear colour chart has both symbols and coloured squares and so it is beautifully easy to read.

There are no reviews yet.

Only logged in customers who have purchased this product may leave a review. 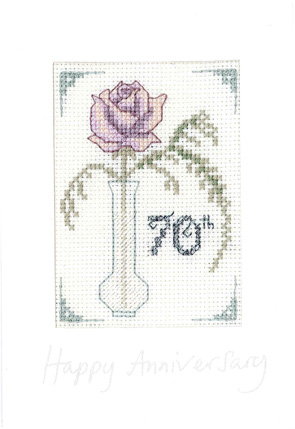